Velvet is why we have Fall and Winter.

Sweater is from Newport News. Artful Blasphemy is particularly fond of how feminine and shapely it is, however it also has crocheted lace sleeves, which is not warm at all, so there is a gray tee underneath.

Artful Blasphemy actually finds many reasons to question the design of sweaters. Like, why would a person want a short sleeved sweater? Why would you ventilate the sleeves? Sweater Design: The Secretive World of Climate and Knitting.

Crushed velvet broomstick skirt by Ravia, acquired at the fabulous Double Take in Santa Fe, New Mexico. This is, bar none, the best second hand store you’ll ever go to. They have extremely high end designer wear, and entire section of vintage and modern Western wear, and then “regular” second hand. It’s one of the Artful Blasphemer’s favorite places.

See you next year, ducks! Remember, a hangover is a terrible way to start the new year.

The next step in the new body of work, a series of assemblages. This one, The Mermaid’s Funeral, is shown above in a test layout. I have the background painting where I want it, so now I have to decide how to lay in the other elements and then attach them. It will likely change a bit before I’m entirely satisfied, but I’m closing in on it.

The blues and the grays and the blonde….This is where Artful Blasphemy hit her stride with the new hair color.

This is just a stellar weekend outfit-layered, warm and comfortable.

Sweater: Adore, size M, from Satan. The hand painted look reminds me of rain on a window.

Cotton knit tights–very cozy, although they tend to respond more enthusiastically to gravity and have to be yanked up from time to time.

I am an empath; like most people labeled “sensitive” or “anxious,” I am frequently dismissed and almost always out of step with those around me. It’s no wonder, then,  that I married whatever the opposite of an empath might be (a Stone, I might say in my less generous moments)–we can’t have two quivering lumps always in a tizzy and hope to get anything done.

Find that framework too Star Trek? I’m an engager, and my husband and his family are avoiders. While I believe Engagement is always superior, years of therapy suggest that perhaps each has its merits. BUT. What happens around my husband’s family is that I am like a cat with its tail in an electrical socket. All the unspoken information, hostility, passive-aggressiveness, anger, rage, etc is invisible to them even as I am absolutely drowning in it.

Over the course of this holiday visit, my MIL was unwell. No one was willing to acknowledge that a) this was cramping EVERYONE’S STYLE or b)that it might be serious. So we sat around the house for three days while she carted a bottle of Pepto Bismol around and spent hours in the bathroom. Everyone else seemed okay with this situation, while I felt like I was being flayed alive. I finally said something on Sunday evening, along the lines of, “She seems very unwell, are you going to do anything about this?” I was shut out, “Oh, she won’t let me do anything” and “Oh, this is normal” etc. I insisted, gently, that I felt it was otherwise.

Thus, while one might expect to be wracked with guilt, I was actually tremendously relieved when we had to have her carted off to the hospital via ambulance due to congestive heart failure. What? Yes. Suddenly my anxiety lifted, and I realized that all of my agitation (door slamming, fits of temper, feeling INSANE) was due to the fact that something very serious was being tacitly ignored. Once it couldn’t be ignored, it was like I suddenly returned to normal–the boiler had burst, and now the waiting was over.

That lasted all of yesterday. Today the anxiety is creeping back up, as it seems Denial Fever has again been contracted and the FIL is saying things like “Out of the hosptial today” and “feeling fine” which, really, are not the things we say in relationship to “Congestive Heart Failure.” Right? I’m sure of it. We say, “Long term care” and “potentially fatal” and “Must get to the bottom of what is causing this” and “THIS IS A HUGE MOTHERFUCKING DEAL”. At least, that’s what the voices in my head are shouting, even as I again lose step with the rest of the crowd and find myself on Reality Island, all alone. Well, not entirely alone; my husband is trying to balance between the two worlds, which is a demanding and likely impossible task.

In The Emperor’s New Clothes, they don’t talk about how it felt to be that child–the one pointing to the naked Emperor–as everyone stared at her, shushed her, maybe even shamed her for naming what was happening. That’s the real story–trying to stick to the story in the face of a hundred frowning automatons who want nothing to do with reality and would very much like for you to shut the hell up.

Look how well the necklace echoes the filigree design on that Max Studio dress! Artful Blasphemy was a hair worried about how short that dress was, but opaque tights and some kick ass boots evened things out.

Necklace: An estate sale find that cost $40 and has been worth every penny–it never fails to steal the show when I wear it.

Boots: Circus by Sam Edelman knee-high combat boots. They have spikes on the heels, and give me a boost when I want to feel confident and slightly intimidating….

I read The Accidental Tourist when it came out. I was struck, then, by how quiet Anne Tyler’s writing was, and how everything had the feeling of being, just a little bit, underwater. Not in the sense of drowning, or of difficulty breathing, but in the sense that things were being viewed a bit more languidly than one might if one were sharing the scenes.

I read several of her books, and then as time passed felt they were formulaic and, mostly, forgot all about her. But, A Spool of Blue Thread won a Pulitzer, and I was curious. Was it just a nod to a lifetime achievement, or was it that this book was really that good? Both. 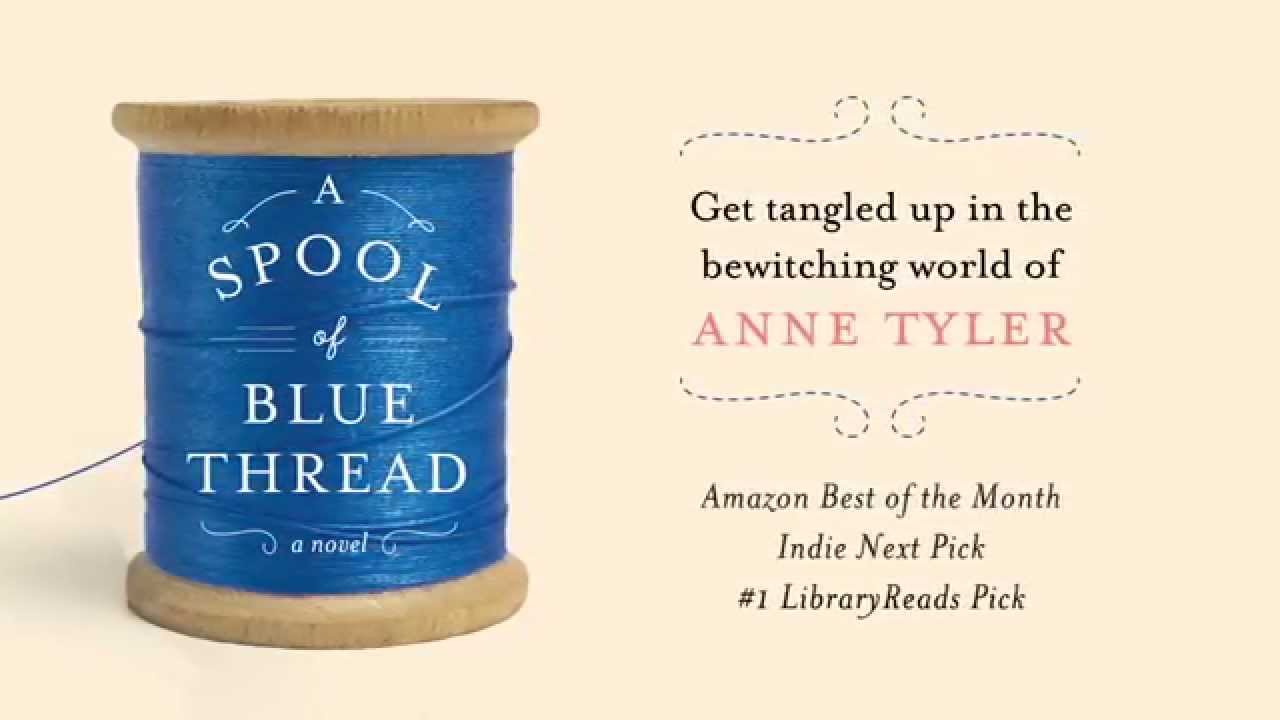 Both is all I can say, really. It’s quiet. The plot unfurls like a lovely walk, without there being any particularly major jolts or conflict. It’s a fascinating picture of how people see their families so differently from each other, and how differently one marital partner might view their marriage from the other. There is always a sense that things will be alright, and sometimes I think that sense is something we should be resisting, not go along with like obedient sheep. There are places where it really isn’t okay, but the sense of calm pervades and we float on by, failing to grasp at the edges.

It’s a good book, it really is. Just, not a GREAT book. If, however, it’s considered her last book as part of a very strong lifetime of work, I can see the reason why it won the Pulitzer, and I can’t really find a reason to argue.

Artful Blasphemy makes a living as a costumer, so the line between costume and regular fashion is already blurry. Case in point, the sleeveless top featured here was made by Grace Costumes New York, and I bought it for $2.50 at a hasty little sale rack during the Day of the Dead festival.

It’s leather, you guys. And it was clearly, at one time, accented with hot glue that has since been peeled off. Everything about it is the opposite of pristine perfection and yet….it’s an amazing piece. Also, it fits as if it were made for the Artful Blasphemer’s figure. Sometimes a piece of clothing is like a work of art, and transcends categorization. It’s a prime example of wearing what makes you happy.

Under layer is Max Studio.

That made you look, right? And, if you are an artist, there is some picture in your head (that is nothing like what you will see here) that will Never. Go. Away. Sorry not sorry.

So, Artful Blasphemy  adores the DKNY Jeans top…dress..tunic…THING there, and the purple shirt is cute as are the green suede boots and the ETCETERA jeggings and yet….

Not so much together. Makes the thighs look, well, FULL.

IF the DKNY Jeans Thing was longer, we might be okay.

IF the jeggings were darker, we might be okay.

IF Artful Blasphemy received an electric shock anytime she attempted to pose with her hands in her pockets, we might be DANDY.

Another page from the in-progress coloring book. Kitties and yarn make quite a mess….

If Artful Blasphemy were younger and spry-er, one supposes she might conduct this blog in real time. However, well, that’s not possible. Thus, this perfectly fine ensemble looks a little odd on Christmas Eve, however I’m not sure who is watching fashion blogs on Christmas Eve, anyway.

Don’t you have a party to go to or something?

So, I’d rather I’d worn a long skirt, but that ship has sailed.

Sweater: Moth, an Anthro label, passed on to me by my mom.

Top and skirt: East Coast Basics, advertised by Satan as being GRAY. Damn you, Satan.

What I Talked About Earlier

Topics I Go On About